Using a random forest ensemble learner we obtain probabilistic forecasts for the FIFA Women's World Cup in France: The clear favorite is defending champion USA followed, with some margin, by host France, England, and Germany.

The 2019 FIFA Women's World Cup will take place in France from 7 June to 7 July 2019. 24 of the best teams from 6 confederations compete to determine the new World Champion. Football fans worldwide are curious what the most likely outcome of the tournament will be. Hence we employ a machine learning approach yielding probabilistic forecasts for all possible matches which can then be used to explore the likely course of the tournament by simulation.

The forecast is based on a hybrid random forest learner that combines three main sources of information: An ability estimate for every team based on historic matches; an ability estimate for every team based on odds from 18 bookmakers; further team covariates (e.g., age, team structure) and country-specific socio-economic factors (population, GDP). The random forest is learned using the FIFA Women’s World Cups in 2011 and 2015 as training data and then applied to current information to obtain a forecast for the 2019 FIFA Women’s World Cup. The random forest actually provides the predicted number of goals for each team in all possible matches in the tournament so that a bivariate Poisson distribution can be used to compute the probabilities for a win, draw, or loss in such a match. Based on these match probabilities the entire tournament can be simulated 100,000 times yielding winning probabilities for each team. The results show that defending champions United States are the clear favorite with a winning probability of 28.1% followed by host France with a winning probability of 14.3%, England with 13.3%, and Germany with 12.9%. The winning probabilities for all teams are shown in the barchart below with more information linked in the interactive full-width version. 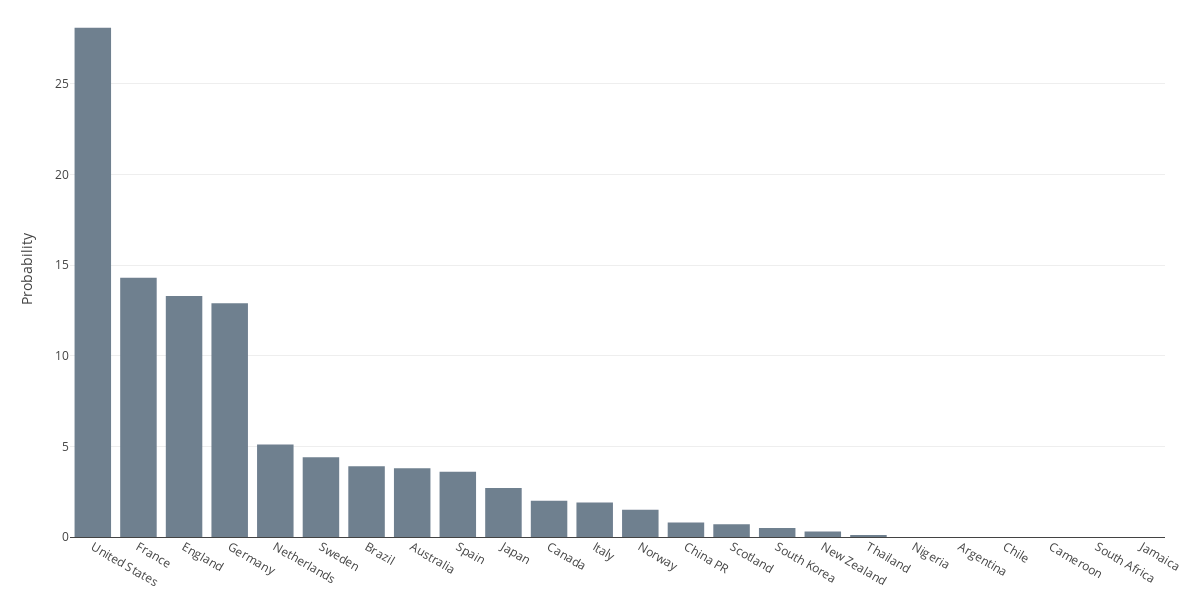 The full study is available in a recent working paper which has been conducted by an international team of researchers: Andreas Groll, Christophe Ley, Gunther Schauberger, Hans Van Eetvelde, Achim Zeileis. It actually provides a hybrid approach that combines three state-of-the-art forecasting methods:

Using the hybrid random forest an expected number of goals is obtained for both teams in each possible match. The covariate information used for this is the difference between the two teams in each of the variables listed above, i.e., the difference in historic match abilities (on a log scale), the difference in bookmaker consensus abilities (on a log scale), difference in mean age of the teams, etc. Assuming a bivariate Poisson distribution with the expected numbers of goals for both teams, we can compute the probability that a certain match ends in a win, a draw, or a loss.

The following heatmap shows the win probabilities in each possible match between a pair of teams with green vs. pink signalling probabilities above vs. below 50%, respectively. The corresponding loss probability is displayed when changing the roles of the teams (i.e., switching rows and columns in the matrix below). The tooltips for each match in the interactive version of the graphic also print the three win, draw, and loss probabilities. 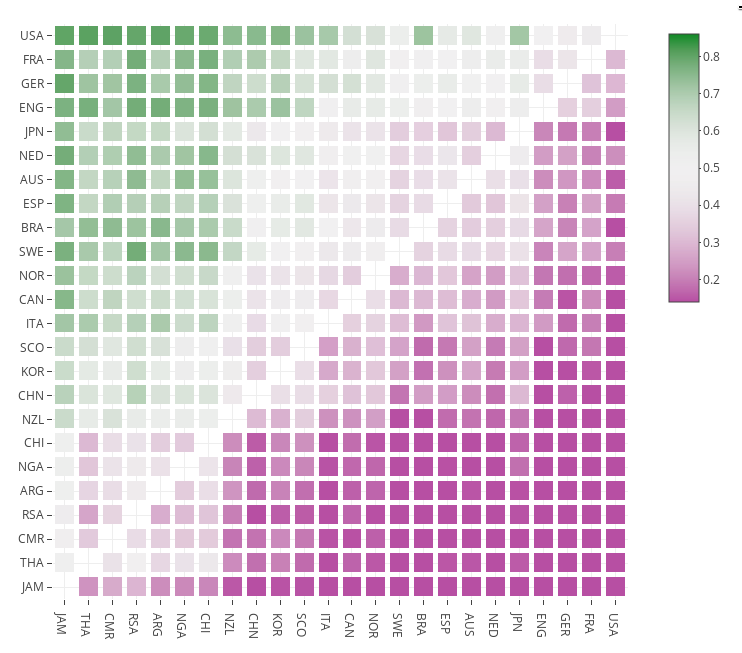 All our forecasts are probabilistic, clearly below 100%, and thus by no means certain - even if the favorite United States has clearly the highest winning probability of all participating teams. However, recall that a single poor performance in the playoffs is sufficient to drop out of the tournament. For example, this happened to host and clear favorite Germany in 2011 (with a winning probability of almost 40% according to the bookmakers) when they lost to Japan 0-1 in extra time in the quarter-finals. Japan then went on to become FIFA Women’s World Champion for the first time.

Another interesting observation is that the bookmakers see both the United States and France almost on par with bookmaker consensus probabilities of 18.1% and 18.7%, respectively. Clearly, the bookmakers (and presumably their customers) expect that France’s home advantage will play an important role. In contrast, our hybrid random forest does not find the home advantage to be an important factor and hence forecasts a much higher winning probability for the United States (28.1%) than for France (14.3%). This is due to the home advantage not having played an important role in our learning data: Germany in 2011 and Canada in 2015 both dropped out in the quarter-finals.

This overround is also the main reason why we recommend against betting based on the results presented here. It assures that the best chances of making money based on sports betting lie with the bookmakers. Instead we recommend to bet only privately among friends and colleagues - or simply enjoy the exciting matches we are surely about to see in France!