A look back the 2018 FIFA World Cup in Russia to check whether our tournament forecast based on the bookmaker consensus model was any good...

How surprising was the tournament?

Last week France won the 2018 FIFA World Cup in a match against Croatia in Russia, thus delivering an entertaining final to a sportful tournament. Many perceived the course of the tournament as very unexpected and surprising because many of the “usual” favorites like Brazil, Germany, Spain, or Argentina did not even make it to the semi-finals. And in contrast, teams like host Russia and finalist Croatia proceeded further than expected. However, does this really mean that expectations of experts and fans were so wrong? Or, how surprising was the result given pre-tournament predictions?

Therefore, we want to take a critical look back at our own Probabilistic Forecast for the 2018 FIFA World Cup based on the bookmaker consensus model that aggregated the expert judgments of 26 bookmakers and betting exchanges. A set of presentation slides (in PDF format) with explanations of the model and its evaluation are available to accompany this blog post: slides.pdf

However, there is one notable exception: Expectations about defending champion Germany were clearly wrong. “Die Mannschaft” was predicted to advance from the group stage to the round of 16 with probability 89.1% - and they not only failed to do so but instead came in last in their group.

Other events that were perceived as surprising were not so unlikely to begin, e.g., for Argentina it was more likely to get eliminated before the quarter finals (predicted probability: 51%) than to proceed further. Or they were not unlikely conditional on previous tournament events. Examples for the latter are the pre-tournament prediction for Belgium beating Brazil in a match (40%) or Russia beating Spain (33%). Of course, another outcome of those matches was more likely but compared with these predictions the results were maybe not as surprising as perceived by many. Finally, the pre-tournament prediction of Croatia making it to the final was only 6% but conditional on the events from the round of 16 (especially with Spain being eliminated) this increased to 27% (only surpassed by England with 36%).

The animated GIF below shows the pre-tournament predictions for each team winning the 2018 FIFA world cup. In the animation the teams that “survived” over the course of the tournament are highlighted. This clearly shows that the elimination of Germany (winning probability: 15.8%) was the big surprise in the group stage but otherwise almost all of the teams expected to proceed also did so. Afterwards, two of the other main favorites Brazil (16.6%) and Spain (12.5%) dropped out but eventually the fourth team with double-digit winning probability (France, 12.1%) prevailed. 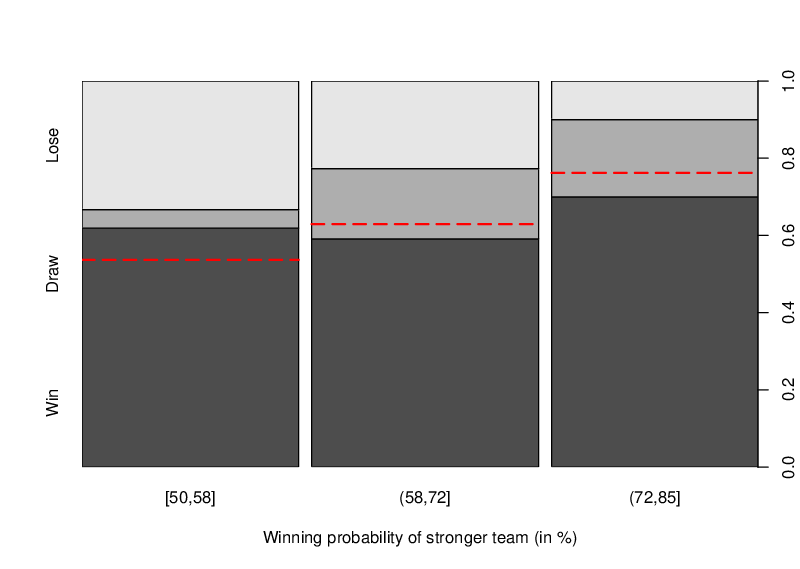 As already mentioned above, there was only one big surprise in the group stage - with Germany being eliminated. As the tables below show, most other results from the group rankings conformed quite well with the predicted probabilities to “survive” the group stage.