After all group stage matches at the UEFA Euro 2020 we have updated the knockout stage forecasts by re-training our hybrid random forest model on the extended data. This shows that England profits most from the realized tournament draw.

After the 36 matches of the group stage were completed earlier this week, we had decided to update our probabilistic forecast for the UEFA Euro 2020. As the evaluation of the group stage showed that, by and large, the forecasts worked reasonably well up to this point, we kept our general strategy and just made a few updates:

While all the changes above have a certain influence, the biggest effect arguably comes from the last item: Because the match-ups for the round of 16 are fixed now, there is a lot less variation in the potential courses of the tournament. Specifically, it is now clear that there are more top favorites in the upper half of the tournament tableau (namely France, Spain, Italy, Belgium, Portugal) than in the lower half of the tableau (England, Germany, Netherlands). In the following it is shown in more detail what the consequences of this are.

Somewhat surprisingly, Italy still has a rather low winning probability of only 7.3% whereas they are now among the top three teams according to most bookmaker odds. This is most likely due to the tournament draw: If they beat Austria in the round of 16, they meet either the FIFA top-ranked team Belgium or defending champion Portugal in the quarter final. In a potential semi-final they would have a high chance of facing either France or Spain.

Using the hybrid random forest an expected number of goals is obtained for both teams in each possible match. Using these, we can compute the probability that a certain match ends in a win, a draw, or a loss in normal time. The same can be repeated in overtime, if necessary, and a coin flip is used to decide penalties, if needed.

The resulting probability that one team beats the other in a knockout match is depicted in the heatmap below. The color scheme uses green vs. brown to signal probabilities above vs. below 50%, respectively. The tooltips for each match in the interactive version of the graphic also print the probabilities for the match results after normal time. 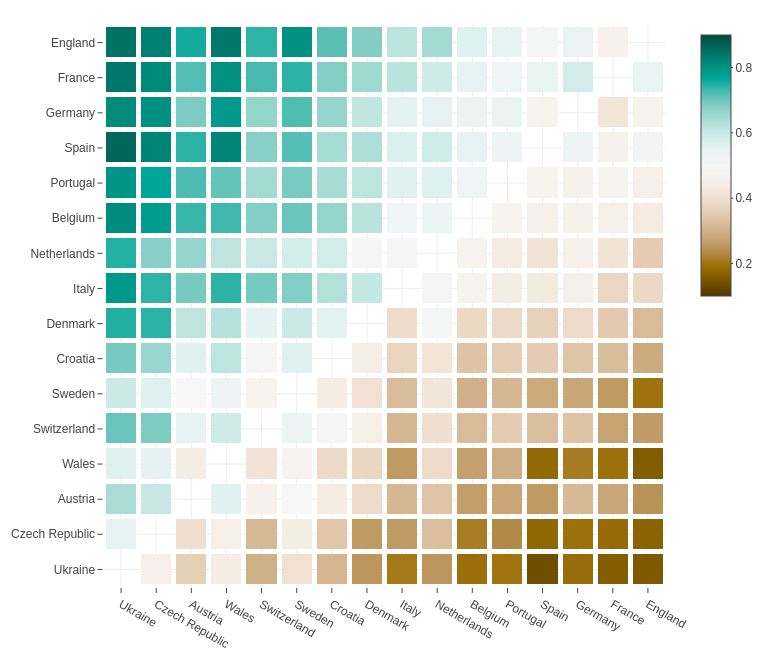 As every single match can be simulated with the pairwise probabilities above, we are able to simulate the entire knockout stage 100,000 times to provide “survival” probabilities for each team across the remaining stages. Teams in the upper half of the tournament tableau are shown in orange while the lower half teams are shown in blue.

This shows that England has relatively low chances of surviving the round of 16 - at least compared to other top teams like France, Italy, or Netherlands who play against weaker opponents. However, provided England proceeds to the quarter final, they have a really high probability of prevailing up to the final match.

In summary, the updates compared to the pre-tournament forecast changed but maybe not as much as expected. The most important change in information is that the remaining course of the tournament is rather clear now while the knowledge from the 36 group stage matches themselves has only moderate effects. Thus, the most exciting part of the UEFA Euro 2020 is only starting now and we can all be curious what is going to happen. Everything is still possible! (Recall that in the 2016 tournament Portugal eventually took the championship despite not winning a single group stage match and ranking third in their group.)