In the controversy over Hurricane Dorian, US President Donald Trump repeatedly claimed that early forecasts showed a high probability of Alabama being hit. We demonstrate that a potentially confusing rainbow color map in the official weather forecasts may have attributed to Trump overestimating the risk.

Hurricane Dorian and the Alabama controversy

Over the last week a big controversy over Hurricane Dorian emerged after US President Donald Trump tweeted on September 1 that Alabama (and other states) “will most likely be hit (much) harder than anticipated”. And after the Birmingham, Alabama, office of the National Weather Service contradicted Trump on Twitter, the US president defended his tweet claiming that earlier forecasts showed a high probability of Alabama being hit. The various pieces of “evidence” for this included a map, manually modified by a marker, leading to the hashtag #sharpiegate trending on Twitter.

Here, we won’t comment further on the controversy as it is undisputed among scientists that on September 1 the forecast path did not include Alabama. However, we will look into the maps that Trump claimed his tweet was based on and we will investigate wether poor color choice may have contributed to a misinterpretation of the maps. Specifically, on September 5 Trump tweeted:

Just as I said, Alabama was originally projected to be hit. The Fake News denies it! pic.twitter.com/elJ7ROfm2p

These maps convey the impression that there is an increased risk for Alabama and especially the three maps with the color coding are rather suggestive. A closer look, though, reveals that the maps are from August 30, have a 5-day forecasting horizon, and pertain to probabilities for tropical-storm-force winds (i.e., not the cone of the hurricane!), with South-East Alabama only having a 5-20% probability.

Although the information in the maps can be correctly decoded using their titles and legends, it can be argued that this may require some expertise or experience and that there is some potential for misinterpretations. For example, data visualization expert Alberto Cairo writes on Twitter: “I just want to give him the benefit of the doubt, honestly. These maps are difficult to understand. For me the bad thing isn’t misinterpreting. It’s not apologizing […]”

And one aspect that makes the maps prone to misinterpretations is the color choice for coding the probabilities. This is a so-called “rainbow color map” going from dark green over bright yellow to red and dark purple. Such color maps are still widely used although it has been widely recognized that they have a number of disadvantages. In the following, Reto Stauffer and I illustrate in detail what the specific problems of the top right map are and suggest a better alternative color choice. 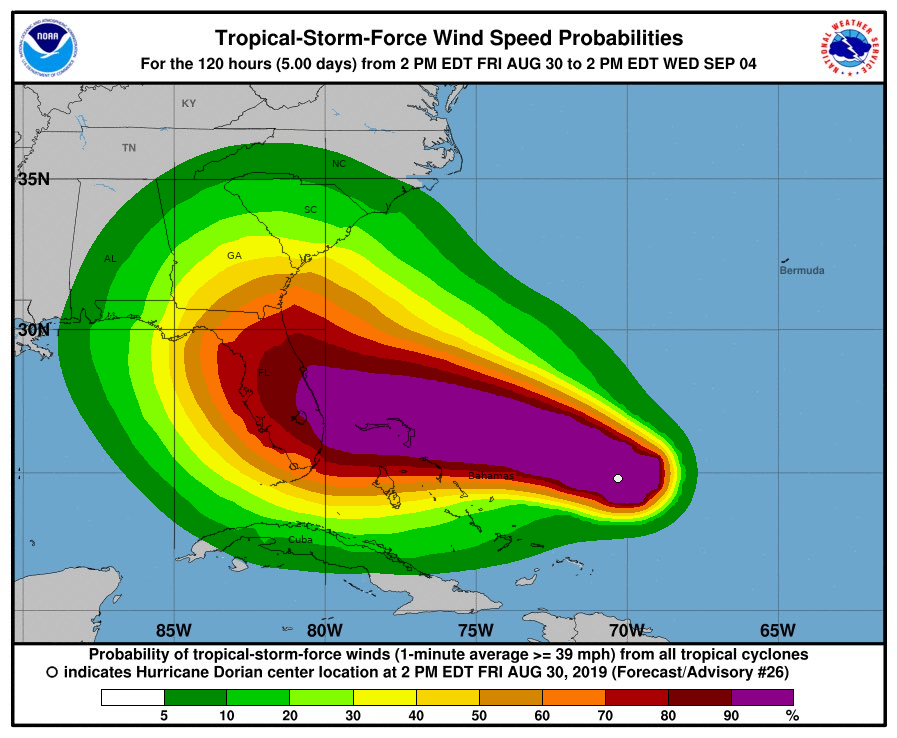 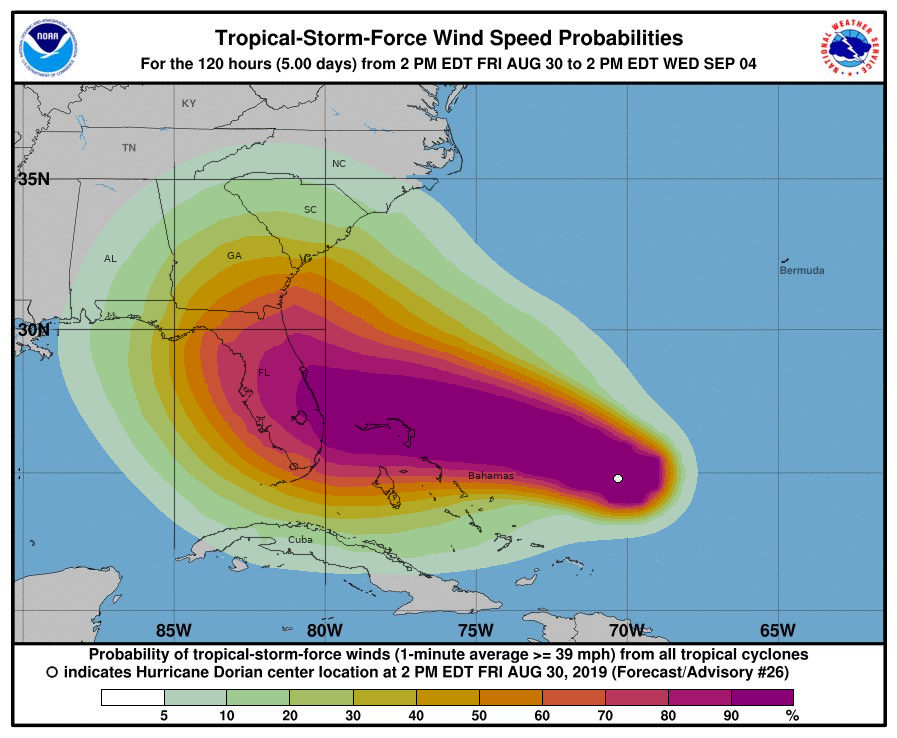 On the left is the original map that was included in Trump’s tweet and on the right is our version with alternative colors. The main problem with the original colors is that the entire area with more than 5% probability is shaded with highly-saturated colors. Some would argue that the traffic light system (green-yellow-red) signals that the green areas are relatively “low risk”. However, we argue that the bright colors and the abrupt transition from “no color” (less than 5%) to “dark green” (for 5-10%) conveys a substantially increased risk for the entire shaded area.

One way to avoid this misinterpretation is to choose colors that go from light (low risk) to dark and colorful (high risk). This is what we have done in the map on the right - while preserving the hues from green over yellow and red to purple. The probabibilities represented in the map are exactly the same but the alternative color choice conveys much more intuitively which areas are affected by increased probabilities beyond 50% or 60% (which do not include Alabama).

In summary, the information in the map certainly does not represent strong evidence for Alabama being likely “hit hard” by Hurricane Dorian. However, the poor color choice facilitates such misinterpretations and better, more intuitive color alternatives are easily available.

Further problems with the original colors can be brought out by converting both maps to grayscale. This shows that not only the transition from below to above 5% is emphasized too much but also the discontinuous transitions between dark and light are very counterintuitive. In contrast, our alternative colors are much more intuitive because they become darker with increasing risk. 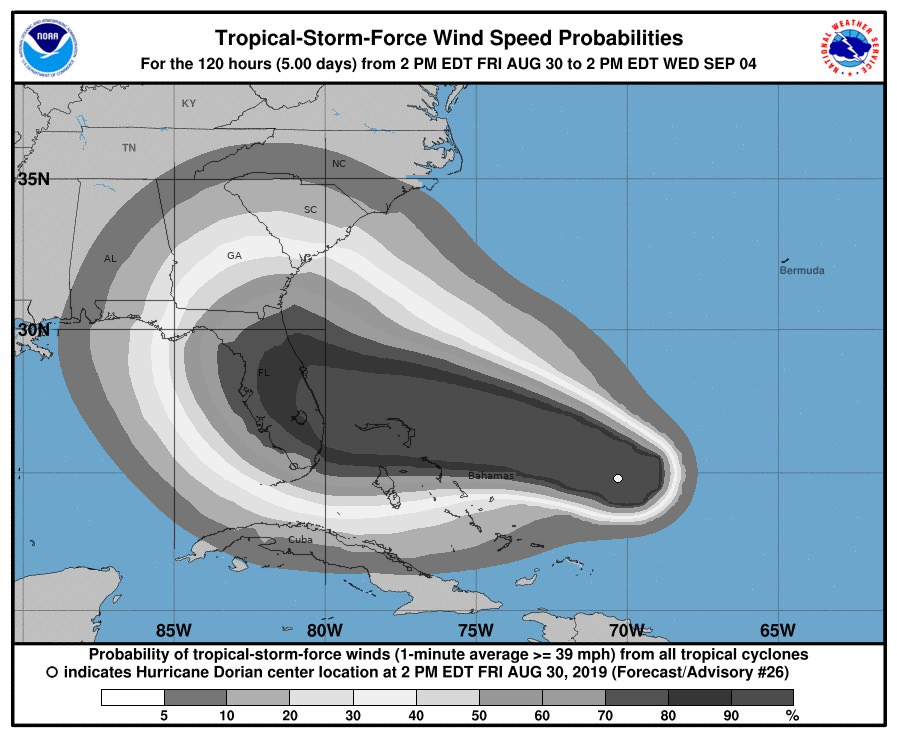 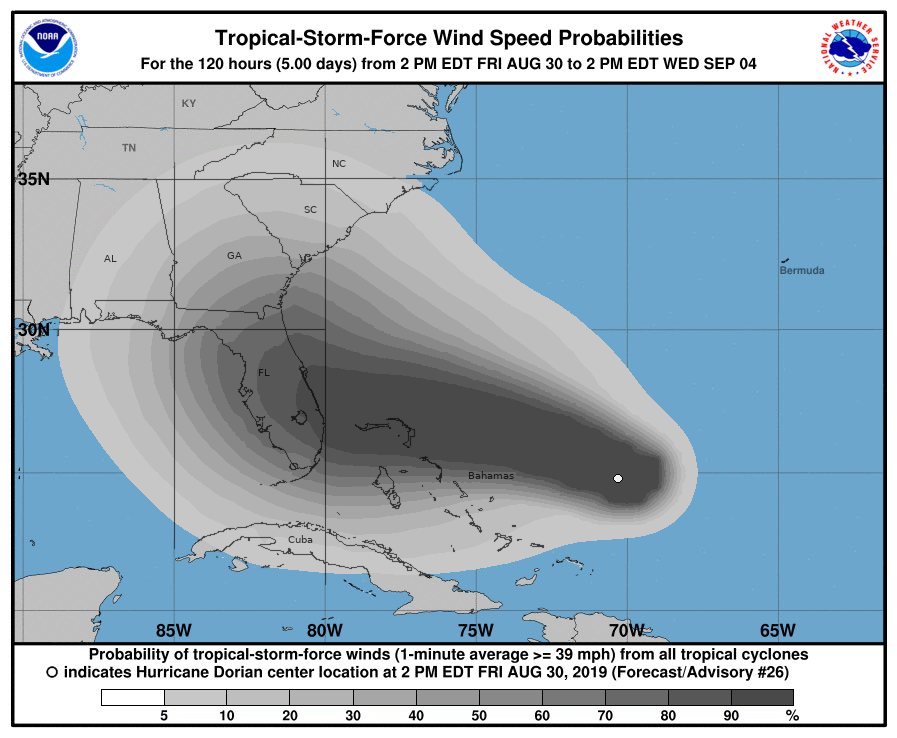 Another related problem can be demonstrated by emulating green-deficient vision (deuteranopia), also showing discontinuities in the original colors. 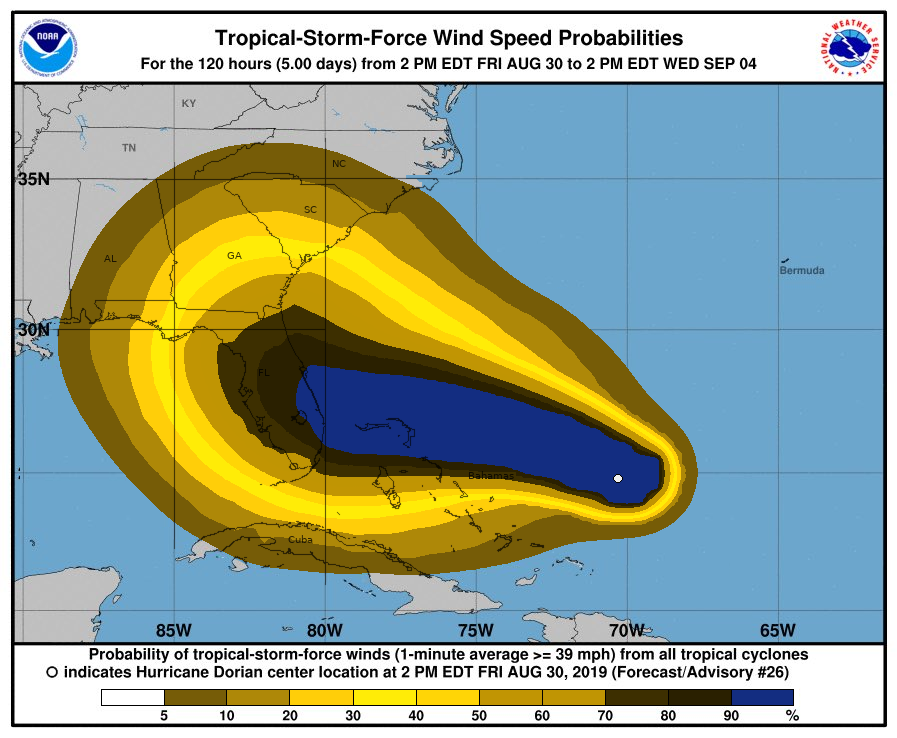 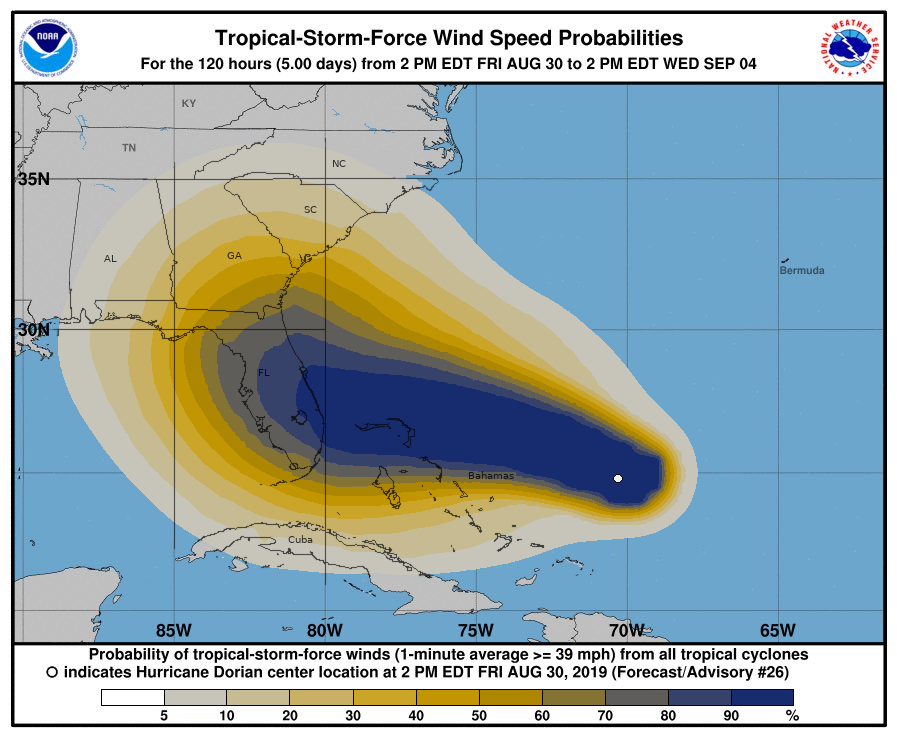 Finally, we briefly comment on some technical details for contructing the alternative color map. We have used our R software package colorspace that facilitates choosing color palettes using the HCL color model, that captures the perceptual dimensions “hue” (type of color, dominant wavelength), “chroma” (colorfulness), and “luminance” (brightness). In the two plots below we show the HCL spectrum of both sets of colors. 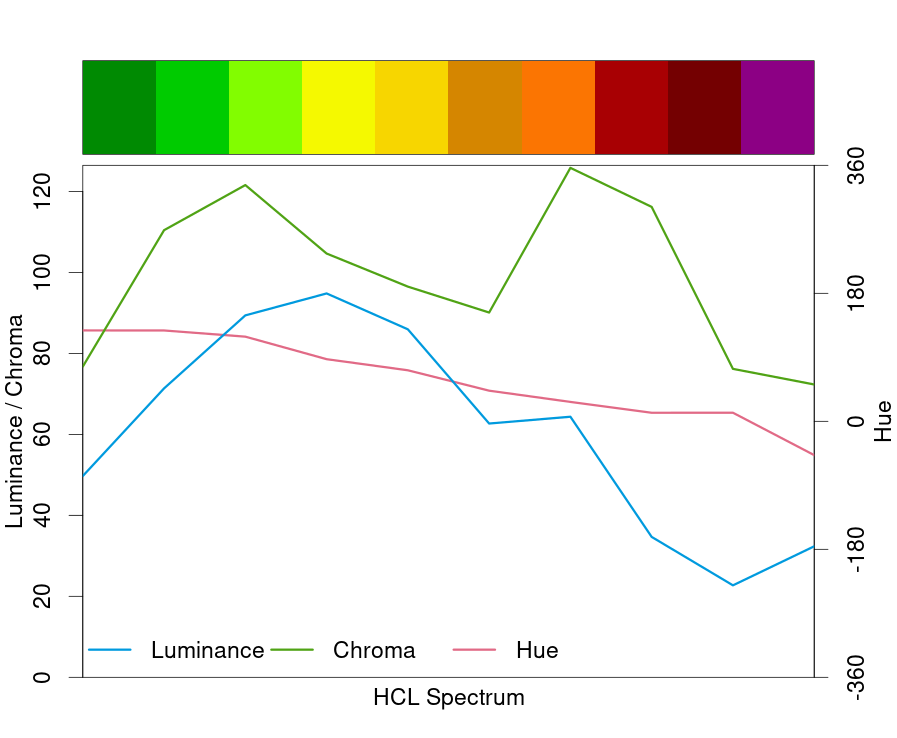 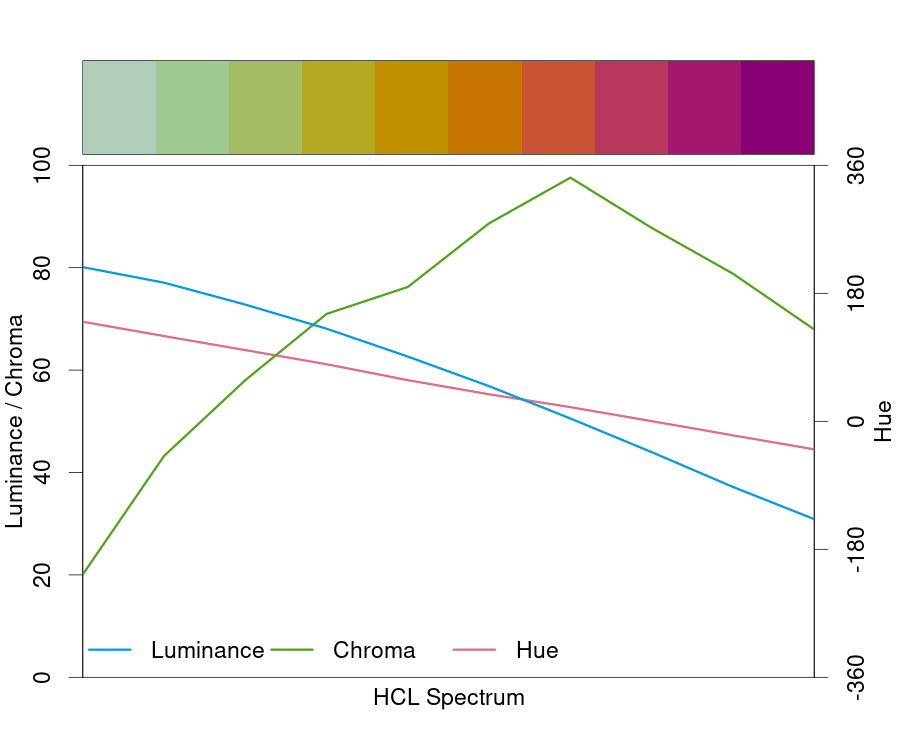 For the original colors on the left we see that luminance (blue line) is non-monotonic, chroma (green line) is high throughout, and hue (red line) goes from green to purple. For our alternative colors we have used essentially the same hues. However, luminance covers a similar range as in the original colors but in a monotonic fashion. And chroma is low for colors associated with low risk.

The R code snippet below shows how the alternative colors can be computed using our colorspace package:

The starting point is the sequential Purple-Yellow palette that we have used previously for risk maps. However, we modify the low-risk hue from yellow to green (hue = 140) and go in the opposite direction through the color wheel (hence hue = 500 = 140 + 360 is used). Moreover, we increase chroma for the high-risk colors and decrease luminance somewhat for the low-risk colors (to be of similar brightness as the gray map in the background). Further similar illustrations of problems with rainbow color maps are available along with more details and explanations on our web site http://colorspace.R-Forge.R-project.org/articles/endrainbow.html.